From Inland sea to Hakodate, and back.
A man staked his life on “endeavoring ventures on the sea”.

Our founding president Kishitaro Hamane was born in 1861 on the island of Yugeshima, which rises out of the Seto Inland Sea. (His birthplace was Yuge Village, now Kamijima-cho, in Ehime Prefecture.) The country was in the middle of the upheavals of the closing years of the Edo Era. In those closing years, Kishitaro passed his childhood studying diligently at a temple elementary school, where he was inspired by the words “endeavoring ventures on the sea”. Subsequently he did an apprenticeship in the city of Hakodate in Hokkaido, in the course which he learned the rudiments of business.
In 1899, he set up on his own and launched the firm “Hamane Shoten”, which sold seafoods on a commission basis. When the business was riding prosperously along, he turned his aim to making a reality of that dream from long ago – “becoming owner of a 10,000-ton ship” – and went into the shipping trade. The spirit of those founding times – “We are our ships, uniting people in harmony to transport goods well, fast and cheaply” – has been carried down to the present in unbroken succession.
His performance in the shipping business ran a smooth course. The world war that came along just at that time brought about an unprecedented boom in shipbuilding, and all the shipbuilding companies surged ahead with building new ships to the exclusion of everything else. Kishitaro needed ship repairs in his shipping business, and was obliged to start up his own shipyards that dealt mainly with repair. Finally, he had taken his first step toward shipbuilding. This would eventually lead to the ONOMICHI of today.

In the 11th year after starting out in the shipping business, Kishitaro became what he had longed to be – the owner of a 10,000-ton ship. Not long after, in 1925, he reached the end of a life of 64 years. It had been a whole lifetime of pursuing dreams and romantic visions.

The emblem that was created as Hamane Shoten’s trademark is still in use at the present.
The meaning contained in the emblem:
The circle represents the sun.
The cross represents four letter L’s,
standing for Liberty, Love, Life and Light.
Hence, the cross emerging from the circle expresses the bold spirit of breaking boundaries and thrusting ahead.

Emerging from the confused period of the war’s closing years under the wartime system,
ONOMICHI makes its own way with technology and reliability as sole assets.

1920 – depression in the wake of the world war. 1923 – the Great Kanto Earthquake. 1929 – worldwide depression. The 1920s were hit by major economic shocks. Under the effects of inflation, the shipbuilding industry declined. It was in such circumstances that, in June 1926 (the month following founder Kishitaro Hamane’s death), Chuzo Hamane became the second President. He was 30 years old, and in that same year he took over the first name “Kishitaro”. This was a war-torn era, with the Sino-Japanese war breaking out in 1937, the Second World War in 1939, and the Pacific War in 1941. But the special demand created by the world war meant a return of prosperous days for the shipbuilding industry. In order to reinforce marine transport capability, large numbers of wartime standard vessels and warships were built.
In 1943, Mukaishima Dock was absorbed into Hitachi Zosen under the wartime Planned Shipbuilding Program. Nonetheless, the dock 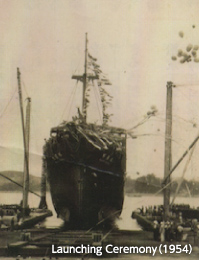 had won the government’s confidence for its technology and enthusiasm, and a shipyard exclusively for building wooden ships was set up there. That was the genesis of ONOMICHI.
In 1945, the war ended. The shipbuilding industry plunged into a slump along with the others. But five years later, the Korean War broke out. The unparalleled special demand gave rise to a global construction boom. This was the era when Japan’s shipbuilding industry regained prosperity and the nation came to be called the “King of Shipbuilding”. 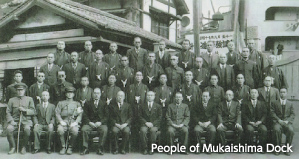 1st, 2nd and 3rd ship-exporting booms with the reopening of the Suez Canal.
We find our own particular way while being buffeted by international circumstances.

The reopening of the Suez Canal in 1957 shortened the time needed for voyages and thus enabled ships to raise their speeds. But this resulted in an excess in ships’ carrying space. Just when Japan’s economy was on the verge of high growth, its shipping and shipbuilding industries hit a slump. In 1959, Yasuo Hamane became our new President, in succession to Kishitaro. As the various shipbuilding companies went into the on-land machinery segment due to the slump in the industry, ONOMICHI came out with a policy of “Shipbuilding All the Way”, based on the motto of “A Shipyard for Shipowners”. A second boom in ship exports eventually arrived with the global increase in oil demand and the rapid rise in grain transport volumes. But due to the effects of the prolonged depression, a switch to low-priced ships was taking place across the world, and ONOMICHI suffered with the rest of the industry.
As a result of the 1964 Tokyo Olympics, the closure of the Suez Canal, the increase in global oil demand and other changes in domestic and overseas circumstances, a third boom in ship exports came along, and the curtain rose on an era of supersize ships. Toward constructing large ships, 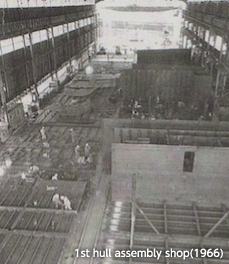 ONOMICHI concluded a technical guidance agreement with Hitachi Zosen and moved ahead with equipment augmentation. Under the new President’s leadership, our business results grew smoothly. Behind that were our special characteristics – we standardized our various new-ship models so as to be able to handle diverse types of ships, and had the capability to take on a high-volume orders for ships of the same model, thanks to our continuous construction system. 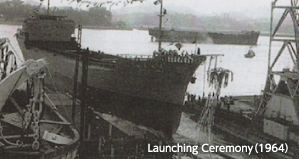 In spite of difficulty, ONOMICHI thrusts ahead toward the future.
We are our ships, uniting people in harmony to transport goods well, fast and cheaply!

Despite its destiny as an order-based industry, shipbuilding is directly impacted by the economic situation at home and overseas. In 1979, the second Oil Crisis struck. In 1983, against a backdrop that included the subsequent rise of the South Korean shipbuilding industry, we started reducing our work hours. When the ship repair segment entered an era of competition for orders in 1984, we made moves such as forming four neighboring shipbuilding companies into a Group (Yonsha-kai) so as to intensify cross-company collaboration in implementing problem resolution and cost-cutting measures. Even so, we were impacted by the high yen in 1986 – the year when Japan yielded the “King of Shipbuilding” position to South Korea. In 1987, the entire Japanese shipbuilding industry was on the brink of a life-or-death crisis.
The President began his New Year Message for 1986 with: “The big shipbuilders are gradually downscaling their building of new ships, but our company has no mode of existence apart from shipbuilding.”
Those words describe very 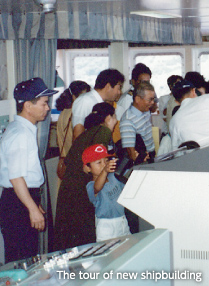 aptly the situation in which ONOMICHI was placed at that time. And ONOMICHI came back to life, in the way he expressed with the words quoted. Time and again, through cost-cutting, computerization of production systems, equipment expansion to cope with larger ships, and other moves, we have surmounted the critical situations that have arisen.
The more you face up to hardship, the better you can resurrect yourself like a phoenix and soar upward. That is the story of ONOMICHI – a history of over 100 years since our genesis. 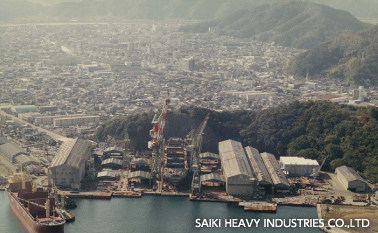 Launching out into container ship construction

As a result of repair work on a freight ship belonging to Evergreen Marine Corp. (“Evergreen”), one of the few companies in the world that operate container ships,
ONOMICHI succeeded in getting its first orders for a full container ship and conversion of a large ship. We won high appraisal from the shipowner for our technological capability and corporate stance of putting top priority on quality with regard to this work. It led on to our track record of a cumulative total of 23 container ships built by continuous construction. 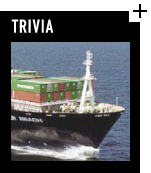 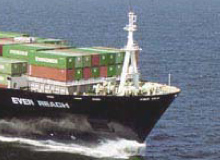 Foremast and radar-mast designs created in response to a customer’s wish: “We’d like you to make it so people can tell instantly they’re ONOMICHI ships.” ONOMICHI’s designs feature also in ships built by other companies. 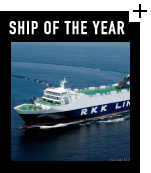 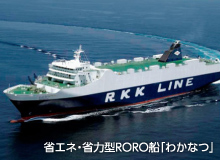 Energy- and labor-saving RORO ship developed according to a “quickest time for cargo work” concept. Equipped with a world-first auto lashing devices that save labor for crew during lashing work and speed it up.

EVERGREEN is a Taiwan-based shipping line that forms the nucleus of a large corporate group that has expanded to include an airline company and hotel businesses. We made EVERGREEN’s acquaintance when it divided orders for a series of “G-type” ships among three shipyards, of which we were one. ONMICHI had been building such ships since 1984 and their quality finish – lower hull vibration than other shipbuilders’ vessels, more detailed and painstaking workmanship and so on – had been highly rated. We had achieved the recognition that “ONOMICHI builds ships of fine quality”.
We were urged to use drawings provided by the big shipyards, but we refused and did the designing on our own efforts. In fact, ONOMICHI’s reputation for technology and quality spread to the point where the opposite happened and we supplied drawings to other companies.
“We are our ships, uniting people harmoniously to transport goods well, fast and cheaply” – that spirit is as alive now as it has always been.